Differential cerebral involvement in the cognitive functioning of bilinguals. 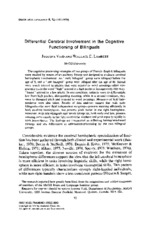 The cognitive processing strategies of two groups of French-English bilinguals were studied by means of an auditory Stroop test designed to evaluate cerebral hemispheric involvement. An “early bilingual” group were bilingual before the age of 5, and a “late bilingual” group were bilingual after the age of 10. Stimuli were words uttered in pitches that were related to word meanings either congruently (as in the word “high” uttered in a high pitch) or incongruently (the word “haute” uttered in a low pitch). In one condition, subjects were to differentiate low from high pitches, disregarding meaning, while in a second condition, they were to disregard pitch and respond to word meanings. Measures of field independence were also taken. Results of data analyses suggest that male early bilinguals-the most field independent subgroup-process meaning efficiently in both cerebral hemispheres, but process pitch better in the right hemisphere. However, male late bilinguals and female bilinguals, both early and late, process meaning more rapidly in the right cerebral hemisphere and pitch equally rapidly in both hemispheres. The findings are interpreted as reflecting hemisphere-based strategy and sex differences in information-processing by the two bilingual groups.