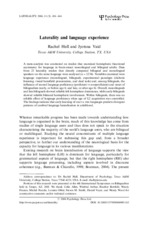 A meta-analysis was conducted on studies that examined hemispheric functional asymmetry for language in brain-intact monolingual and bilingual adults. Data from 23 laterality studies that directly compared bilingual and monolingual speakers on the same language were analysed (n / 1234). Variables examined were language experience (monolingual, bilingual), experimental paradigm (dichotic listening, visual hemifield presentation, and dual task) and, among bilinguals, the influence of second language proficiency (proficient vs nonproficient) and onset of bilingualism (early, or before age 6; and late, or after age 6). Overall, monolinguals and late bilinguals showed reliable left hemisphere dominance, while early bilinguals showed reliable bilateral hemispheric involvement. Within bilinguals, there was no reliable effect of language proficiency when age of L2 acquisition was controlled.The findings indicate that early learning of one vs. two languages predicts divergent patterns of cerebral language lateralisation in adulthood.