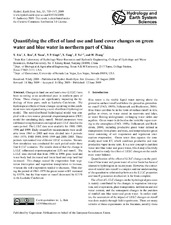 Changes in land use and land cover (LULC) have been occurring at an accelerated pace in northern parts of China. These changes are significantly impacting the hydrology of these parts, such as Laohahe Catchment. The hydrological effects of these changes occurring in this catchment were investigated using a semi-distributed hydrological model. The semi-distributed hydrological model was coupled with a two-source potential evaportranspiration (PET) model for simulating daily runoff. Model parameters were calibrated using hydrometeorological and LULC data for the same period. The LULC data were available for 1980, 1989, 1996 and 1999. Daily streamflow measurements were available from 1964 to 2005 and were divided into 4 periods: 1964–1979, 1980–1989, 1990–1999 and 2000–2005. These periods represented four different LULC scenarios. Streamflow simulation was conducted for each period under these four LULC scenarios. The results showed that the change in LULC influenced evapotranspiration (ET) and runoff. The LULC data showed that from 1980 to 1996 grass land and water body had decreased and forest land and crop land had increased. This change caused the evaporation from vegetation interception and vegetation transpiration to increase, whereas the soil evaporation tended to decrease. Thus during the period of 1964–1979 the green water or ET increased by 0.95%, but the blue water or runoff decreased by 8.71% in the Laohahe Catchment.