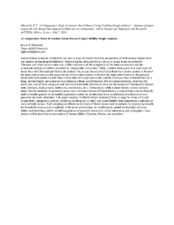 Ancient Greek domestic architecture has been a topic of interest from the perspectives of both ancient literary texts and modern archaeological fieldwork. Scholarship has advanced from a focus on house forms described by Vitruvius and other ancient authors to a fuller awareness of the complexity of the built environment and the contextual analysis of artifacts revealed by stratigraphic excavation. Today, scholars distinguish four main types of house from the Classical and Hellenistic periods: the prostás house (which is defined by a narrow portico in front of the main suite of rooms), the pastás house (with a wider portico in front of the main suite of rooms), the peristyle house (with colonnades around three or four sides of an open-air court), and the Herdraumhaus (characterized by a large, architecturally prominent room containing a fixed, central hearth). Not all extant structures, however, fall neatly into one of these categories and there is considerable variation in plan and the location of functionally distinct units (kitchens, dining rooms, bathrooms, workrooms, etc.). Furthermore, while ancient literary sources seem to imply that the existence of gendered spaces was a common feature of Greek houses, a clear division into exclusively male or female quarters is not readily apparent in either the architectural form or artifactual distribution of most preserved domestic structures. This paper employs Visibility Graph Analysis (VGA) to map the values of visual connectivity, integration, entropy, clustering coefficiency, control, and controllability that characterize a selection of ancient Greek houses. Such mapping contributes to the study of Greek houses and households by expressing visually the formal dimensions and complexity of domestic architecture, by clarifying the spatial relationships of rooms within each dwelling, and by identifying patterns of potential movement, social interaction, and segregation. Case studies will be drawn from excavations at Athens, Delos, Olynthus, Priene, and elsewhere.