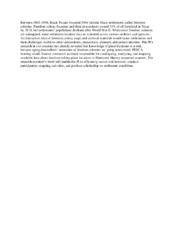 When asked to identify the most critical moments in Black history, Americans’ typical responses include Emancipation, the Civil Rights movement, and the election of the first African American president. However, respondents are less likely to mention freedom colonies. Freedom colonies (FC) are historic African American settlements which are particularly vulnerable to natural disasters, absent from public planning records, and lack access to the funding and technical assistance afforded incorporated, mapped areas in Texas. From 1865–1920, African Americans founded 557 self-sustaining FC settlements throughout Texas, of which 347 have been mapped. Initially, Texas’ FC were ‘‘individually unified only by church and school and residents' collective belief that a community existed” (Sitton, Thad & Conrad, James H., 2005, p. 18). Many FC, unfortunately, disappeared from public records, maps, and memory. These settlements’ populations, historic buildings, and visibility declined after World War II; a lack of estate planning made their landowners vulnerable to land loss. Sprawl, climate change, and gentrification have also destroyed these once secure, self-reliant communities. Furthermore, most formerly enslaved Texans settled in the only areas available to them--bottomland in low-lying areas (Sitton, Thad & Conrad, James H., 2005, pp. 23, 29) often in the path of hurricanes. The Texas Freedom Colonies Project Atlas and Study is a digital humanities platform and survey which crowdsources, maps, and aggregates freedom colony place, heritage, and social geographic data. The platform serves simultaneously as an online archive of various forms of "place evidence" in order to make visible to policymakers, researchers, and descendants of settlement founders, these endangered, historic spaces and places. This is the BETA version of the mapping tool used for testing and improving the current tool before its expansion.