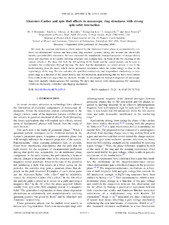 We study the quantum interference effects induced by the Aharonov-Casher phase in asymmetrically confined two-dimensional electron and heavy-hole ring structure systems, taking into account the electrically tunable spin-orbit (SO) interaction. We have calculated the nonadiabatic transport properties of charges (heavy holes and electrons) in two-probe thin-ring structures and compare how the form of the SO coupling of the carriers affects it. We show that both the SO splitting of the bands and the carrier density can be used to modulate the conductance through the ring. We show that the dependence on carrier density is due to the backscattering from the leads, which shows pronounce resonances when the Fermi energy is close to the eigenenergy of the ring. We also calculate the spin Hall conductivity and longitudinal conductivity in four-probe rings as a function of the carrier density and SO interaction, demonstrating that for heavy-hole carriers both conductivities are larger than for electrons. Finally, we investigate the transport properties of mesoscopic rings with spatially inhomogeneous SO coupling. We show that devices with inhomogeneous SO interaction exhibit an electrically controlled spin-flipping mechanism.