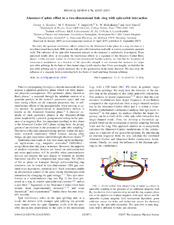 We study the quantum interference effects induced by the Aharonov-Casher phase in a ring structure in a two-dimensional heavy-hole (HH) system with spin-orbit interaction realizable in narrow asymmetric quantum wells. The influence of the spin-orbit interaction strength on the transport is analytically investigated. These analytical results allow us to explain the interference effects as a signature of the Aharonov-Casher Berry phases. Unlike previous studies on electron two-dimensional Rashba systems, we find that the frequency of conductance modulations as a function of the spin-orbit strength is not constant but increases for larger spin-orbit splittings. In the limit of thin channel rings (width smaller than Fermi wavelength), we find that the spin-orbit splitting can be greatly increased due to the quantization in the radial direction. We also study the influence of a magnetic field considering both the limits of small and large Zeeman splittings.