Character of states near the Fermi level in (Ga,Mn)As: Impurity to valence band crossover RID E-6453-2010 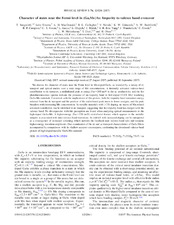 We discuss the character of states near the Fermi level in Mn-doped GaAs, as revealed by a survey of dc transport and optical studies over a wide range of Mn concentrations. A thermally activated valence-band contribution to dc transport, a midinfrared peak at energy h omega approximate to 200 meV in the ac conductivity, and the hot photoluminescence spectra indicate the presence of an impurity band in low-doped (2% doping, no traces of Mn-related activated contribution can be identified in dc transport, suggesting that the impurity band has merged with the valence band. No discrepancies with this perception are found when analyzing optical measurements in the high-doped GaAs:Mn. A higher-energy (h omega approximate to 250 meV) midinfrared feature which appears in the metallic samples is associated with inter-valence-band transitions. Its redshift with increased doping can be interpreted as a consequence of increased screening, which narrows the localized-state valence-band tails and weakens higher-energy transition amplitudes. Our examination of the dc and ac transport characteristics of GaAs:Mn is accompanied by comparisons with its shallow acceptor counterparts, confirming the disordered valence-band picture of high-doped metallic GaAs:Mn material.