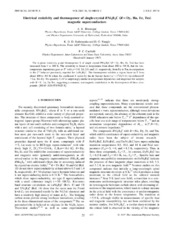 The in-plane resistivity rho and thermopower S of single crystal RNi2B2C (R=Dy, Ho, Er, Tm) has been measured from 4 to 300 K. The resistivity is linear in temperature from about 100 to 300 K, but the low-temperature dependence goes as T-p With p = 3.0, 2.6, 2.0, and 1.4, respectively, from Dy to Tm, in comparison to the T-2 behavior previously reported for LuNi2B2C. The thermopower exhibits a region linear in T from about 100 to 300 K where the coefficient b scales by the de Gennes factor (g-1)(2)J(J+1) for different R = Lu, Tm-Dy. The quantity S-b T is surprisingly similar in temperature dependence and magnitude for samples with R = Y, Lu, Dy-Tm, suggesting a common, nonmagnetic contribution to the thermopower of these compounds.