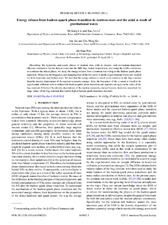 Describing the hyperonic and quark phases of neutron stars with an isospin- and momentum-dependent effective interaction for the baryon octet and the MIT bag model, respectively, and using the Gibbs conditions to construct the mixed phase, we study the energy release from a neutron star owing to the hadron-quark phase transition. Moreover, the frequency and damping time of the first axial w mode of gravitational waves are studied for both hyperonic and hybrid stars. We find that the energy release is much more sensitive to the bag constant than the density dependence of the nuclear symmetry energy. Also, the frequency of the w mode is found to be significantly different with or without the hadron-quark phase transition and depends strongly on the value of the bag constant. Effects of the density dependence of the nuclear symmetry energy become, however, important for large values of the bag constant that lead to higher hadron-quark transition densities.