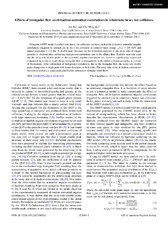 Using the AMPT model for relativistic heavy ion collisions, we have studied the di-hadron azimuthal angular correlations triggered by emitted jets in Au + Au collisions at center-of-mass energy root s(NN) = 200 GeV and impact parameter b = 8 fm. A double-peak structure for the associated particles at the away side of trigger particles is obtained after subtracting background correlations due to the elliptic flow. Both the near-side peak and the away-side double peaks in the azimuthal angular correlations are, however, significantly suppressed (enhanced) in events of small (large) triangular flow or triangularity in the initial collision geometry as a result of fluctuations. After subtraction of background correlations due to the triangular flow, the away-side double peaks change into a single peak with broad shoulders on both sides. The away side of the di-hadron correlations becomes essentially a single peak after further subtraction of higher-order flows.