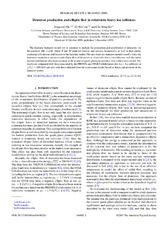 The hadronic transport model ART is extended to include the production and annihilation of deuterons via the reactions BB dM, where B and M stand for baryons and mesons, respectively, as well as their elastic scattering with mesons and baryons in the hadronic matter. This new hadronic transport model is used to study the transverse momentum spectrum and elliptic flow of deuterons in relativistic heavy ion collisions, with the initial hadron distributions after hadronization of the produced quark-gluon plasma taken from a blast wave model. The results are compared with those measured by the PHENIX and STAR Collaborations for Au+Au collisions at s(NN)=200 GeV and also with those obtained from the coalescence model based on freeze-out nucleons in the transport model.