Photon bremsstrahlung and diffusive broadening of a hard jet 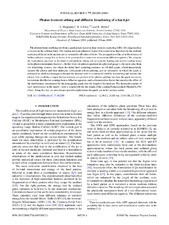 The photon bremsstrahlung rate from a quark jet produced in deep-inelastic scattering (DIS) off a large nucleus is studied in the collinear limit. The leading medium-enhanced higher twist corrections that describe the multiple scattering of the jet in the nucleus are re-summed to all orders of twist. The propagation of the jet in the absence of further radiative energy loss is shown to be governed by a transverse momentum diffusion equation. We compute the final photon spectrum in the limit of soft photons, taking into account the leading and next-to-leading terms in the photon momentum fraction y. In this limit, the photon spectrum in a physical gauge is shown to arise from two interfering sources: one where the initial hard scattering produces an off-shell quark, which immediately radiates the photon and then undergoes subsequent soft rescattering, and an alternative in which the quark is produced on-shell and propagates through the medium until it is driven off-shell by rescattering and radiates the photon. Our result has a simple formal structure as a product of the photon splitting function, the quark transverse momentum distribution coming from a diffusion equation, and a dimensionless factor that encodes the effect of the interferences encountered by the propagating quark over the length of the medium. The destructive nature of such interferences in the small-y limit is responsible for the origin of the Landau-Pomeranchuck-Migdal (LPM) effect. Along the way we also discuss possible implications for quark jets in hot nuclear matter.