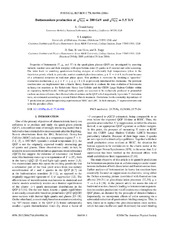 Properties of bottomonia (Upsilon,chi(b), and Upsilon ') in the quark-gluon plasma (QGP) are investigated by assessing inelastic reaction rates and their interplay with open-bottom states (b quarks or B mesons) and color screening. The latter leads to vanishing quarkonium-binding energies at sufficiently high temperatures (close to the dissolution point), which, in particular, renders standard gluo-dissociation, g+Upsilon -> b ->(b) over bar, inefficient because of a substantial reduction in final-state phase space. This problem is overcome by invoking a "quasifree" destruction mechanism, g,q,(q) over bar+Upsilon -> g,q,(q) over bar +b+(b) over bar, as previously introduced for charmonia. The pertinent reaction rates are implemented into a kinetic theory framework to evaluate the time evolution of bottomonia in heavy-ion reactions at the Relativistic Heavy Ion Collider and the CERN Large Hadron Collider within an expanding fireball model. Although bottom quarks are assumed to be exclusively produced in primordial nucleon-nucleon collisions, their thermal relaxation times in the QGP, which importantly figure into Upsilon-formation rates, are estimated according to a recent Fokker-Planck treatment. Predictions for the centrality dependence of Upsilon production are given for upcoming experiments at RHIC and LHC. At both energies, Upsilon suppression turns out to be the prevalent effect.