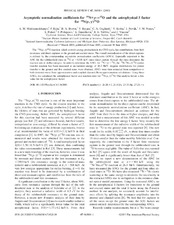 The N-14(p,gamma)O-15 reaction, which controls energy production in the CNO cycle, has contributions from both resonance and direct captures to the ground and excited states. The overall normalization of the direct captures is defined by the corresponding asymptotic normalization coefficients (ANCs). Especially important is the ANC for the subthreshold state in O-15 at -0.504 keV since direct capture through this state dominates the reaction rate at stellar energies. In order to determine the ANCs for N-14+p-->O-15, the N-14(He-3,d)O-15 proton transfer reaction has been measured at an incident energy of 26.3 MeV. Angular distributions for proton transfer to the ground and five excited states were obtained. ANCs were then extracted from comparison to both distorted-wave Born approximation and coupled-channels Born approximation calculations. Using these ANCs, we calculated the astrophysical factor and reaction rates for N-14(p,gamma)O-15. Our analysis favors a low value for the astrophysical factor.