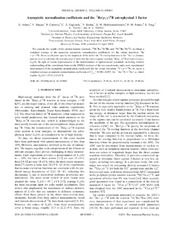 We consider the results of two proton transfer reactions, B-10(Be-7, B-8)Be-9 and N-14(Be-7, B-8)C-13, to obtain a weighted average of the measured asymptotic normalization coefficients for the virtual transition 7Be +pB-8. These coefficients specify the amplitude of the tail of the B-8 overlap function in the Be-7+p channel, and are used to calculate the astrophysical S factor for the direct capture reaction Be-7(p, gamma)B-8 at solar energies, S-17(0) In light of recent improvements in the determination of optical-model potentials, including detailed understanding of the correlations between the DWBA analyses of the two experiments, and a new experimental measurement of the asymptotic normalization coefficients for the virtual transition C-13+pN-14, we report a weighted average asymptotic normalization coefficient of C-p3/2(2)= 0.388+/-0.039 fm(-1) for B-8Be-7+p, which implies S-17(0)= 17.3+/-1.8 eV b.