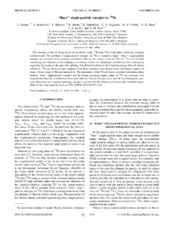 The structure of the low-lying levels in the mirror nuclei Ni-57 and Cu-57 is described within the extended unified model. The problem of single-particle energies in Ni-56 is treated in detail. ''Bare'' single-particle energies are extracted from existing experimental data for the energy levels in Ni-57 and Cu-57 by carefully considering the influence of the coupling to excitations of the core. Important contributions arise, influencing especially the results on the spin-orbit splitting. The differences between the Coulomb energy shifts of various orbitals in Ni-56 are discussed and compared with those resulting from Hartree-Fock calculations carried out using a broad range of Skyrme interactions. The parameters of the Woods-Saxon potential reproducing these neutron ''bare'' single-particle energies and the charge root-mean-square radius of Ni-56 are extracted. It is demonstrated that the contributions associated with the Thomas-Ehrman effect and the electromagnetic spin-orbit interaction are important and large enough to account for the differences between the Coulomb energy shifts of the single-particle levels in Ni-56.