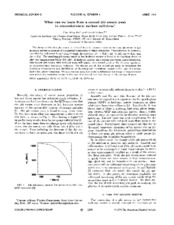 The decay width of a phi meson is reduced from its vacuum value as its mass decreases in hot hadronic matter as a result of the partial restoration of chiral symmetry. This reduction is, however, cancelled by collisional broadening through the reactions phipi --> KK*, phiK --> phiK, phirho --> KK, and phiphi --> KK. The resulting phi meson width in hot hadronic matter is found to be less than about 10 MeV for temperatures below 200 MeV. If hadronic matter has a strong first-order phase transition, this narrow phi meson with reduced mass will appear as a second peak in the dilepton spectrum in ultrarelativistic heavy-ion collisions. We discuss use of this second phi peak to determine the transition temperature and the lifetime of the two-phase coexistence region in the case of a strong first-order phase transition. We also discuss using the peak to determine the range of temperatures over which the transition occurs in the case of a smooth but fast change in the entropy density.