Murder at Mer Rounge: a dialogue on the activities of the Ku Klux Klan in northwestern Louisiana, 1921-1924 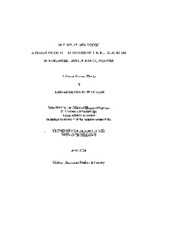 On August 24, 1922, in Bastrop, Louisiana, two men were kidnapped by a group of masked members of the Ku Klux Klan and were subsequently never seen again. Months later, two bodies were discovered in LaFourche Lake near Bastrop, Louisiana. While government officials were convinced that these were the bodies of the two men, many Klan members and non-Klan members alike believed that the bodies had been planted as part of a government conspiracy to uproot the Ku Klux Klan. Their murders sparked both an extensive investigation of Klan activities in Louisiana as well as a more general debate on the role that the "invisible empire" should play in American civil and social life. The Ku Klux Klan first organized in the north-central part of Louisiana in 1921, but the Klan's national membership had significantly grown during the previous decade. As is evidenced by the nation-wide correspondence of Louisiana's then-governor, John Parker, people throughout the United States were also forming ideas on the Klan and its pursuit of "responsible, wholesome government." The Klan attempted to legitimate its ideology by infusing principles of patriotism with religious and racial purity. In my research I have attempted to reconstruct the circumstances that existed in this town of approximately five hundred people in the years surrounding the incident. I describe the origins of a Klan network in the area as well as the particular circumstances that brought about the murder of two anti-Klan community members. Most of the resources available are primary documents, including newspaper reports, letters of correspondence between concerned citizens and government officials, and investigation reports. My research indicates that no work at all has been done on this incident, insofar as it relates to a larger narrative of Klan activity in the United States. I go on to argue that the Klan's use of the moralistic language of patriotism and purity were major factors in the way in which the nation perceived the events.