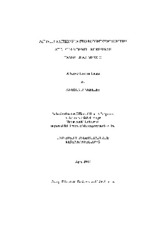 Today, natural systems are undergoing drastic human-induced changes and losses of biodiversity. During this time of change it is extremely important that we understand the underlying mechanisms controlling the structure and composition of biotic communities. Small mammal communities have been studied extensively in arid regions (Brown et al. 2000), but few studies have been conducted in tropical regions. In 1957 Hutchinson proposed niche division as a means of co-existence of similar species. In 1974 Schoener proposed that the dietary, spatial, and temporal were the three main axes along which niche division may occur. This study evaluated the temporal patterns of the rodent communities at two sites in El Cielo Biosphere Reserve, Tamaulipas, Mexico. The first site was located in the Tropical Sub-Deciduous Forest (TSDF) region of the reserve. Six rodent species were trapped during interval trapping: Liomys irroratus (Heteromyidae), Peromyscus levipes (Muridae), Peromyscus leucopus (Muridae), Baiomys taylori (Muridae), Sigmodon hispidus (Muridae), and Oryzomys couesi (Muridae). All species at both sites are nocturnal and granivorous. We used chi-square and G-test analyses and rejected our null hypothesis (Time periods during the night were utilized equally) for all species except for P. leucopus, which had an extremely small sample size. We constructed a null model using Gotelli's Ecosim program against which to test Pianka's niche overlap index, and found that p (observed <= expected) = 0.91 (Gotelli and Entsminger 2001). Likewise, at the second site, located in the Cloud Forest (CF) region, we rejected our null hypothesis for both species (P. levipes and P. ochraventer (Muridae)). P (observed <=expected)=0.87. We concluded that there is a very small chance the patterns observed in either site are random, and thus there is likely an underlying mechanism shaping these patterns. We also observed that O. couesi and L. irroratus overlapped in their spatial and dietary niches, but were separated by their temporal niche utilization. The temporal niche aspect is rarely included in the many studies focusing on dietary and spatial niches. There are still many aspects of activity patterns that are poorly understood.