View Item
JavaScript is disabled for your browser. Some features of this site may not work without it.
NOTE: This item is not available outside the Texas A&M University network. Texas A&M affiliated users who are off campus can access the item through NetID and password authentication or by using TAMU VPN. Non-affiliated individuals should request a copy through their local library's interlibrary loan service. 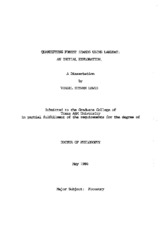 Forest stand parameters were shown to be estimable, using data acquired by the Landsat satellite, at a statistically significant level of accuracy. When volume was regressed against spectral signature, the vegetation index which was found to be most significantly associated with volume was the Kauth and Thomas brightness measure. Average stand height was the forest stand parameter which had the highest level of statistical association with spectral signature. The greenness-brightness ratio was the vegetation index for which this association occurred. Average stand diameter, crown diameter, and per acre basal area were also shown to have statistically significant associations with spectral signature, as is represented on Landsat digital data. Canopy closure and stems per acre did not have significant associations with spectral signature. A computerized classification analysis of spectral signature data for forest stands, based on mensurational characteristics obtained from a cluster analysis of conventional forest inventory data, separated the data into distinct classification categories, rather than grouping the data into a single category which would be expected in a uniform population. An indirect approach to estimation of volume firm spectral signature was done using spectral estimates of canopy closure, crown diameter, and average stand height. These estimates were input into an aerial photo volume table developed for the study area, and a volume estimate obtained. These indirect estimates, along with direct estimates, were not statistically different from the actual volume on a set of stands reserved from the initial model development. Canopy closure was demonstrated not to be useful in the estimation of field based stand parameters, due to its confounded nature among steins per acre and tree diameter, which is similar to that of basal area. In general, Landsat data can be used to enumerate forest stands over large areas with a sufficient degree of accuracy as to allow for its use in forest survey, as an example. The potential for substantial cost reductions in the application of Landsat to forest survey, the potential for the incorporation of remote sensing into the technology of geographic information systems as a component of forest survey and other applications are reviewed along with the potential applications of the results of this study with other remote sensing devices.

This item and its contents are restricted. If this is your thesis or dissertation, you can make it open-access. This will allow all visitors to view the contents of the thesis.