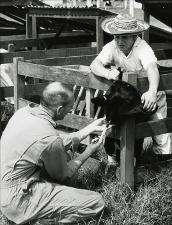 Dr. Kenneth Latimer Kuttler, the son of a Veterinarian, was born May 29, 1924 in Ft. Worth Texas. He earned his DVM in 1945 from Colorado State College and his MS in 1955 from New York State University. In 1965 he received his PhD from the University of East Africa. He was in private practice from 1945-46 and a Captain in the Army Veterinary Corp from 1949-53. Dr. Kuttler was a research Veterinarian for the USDA from 1953-1955 and in 1955 he became Chairman of the University of Nevada's Department of Veterinary Science until 1963. From 1963-1965 he was a research Veterinarian at the Rockefeller Foundation and from 1965 until about 1978 he was Professor and Associate Director of the Institute of Tropical Veterinary Medicine, Texas A&M University. After retiring from A&M he concluded his professional career with the USDA in Maryland and later in Moscow, Idaho where he finally retired in 1986. During his years of research he had the opportunity to move his family on two occasions to Kenya, and once to Bogota, Columbia. He was the author of about 150 professional papers on subjects ranging from Neurotropic viruses to bovine tuberculosis, to white muscle disease in sheep, to anaplasmosis and babesiosis. Dr. Kenneth Latimer Kuttler died at the age of 88 on Nov. 13, 2012 at his home in College Station, Texas.