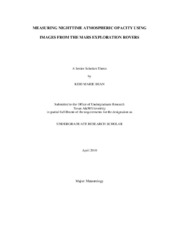 Atmospheric opacity, otherwise known as optical depth, is the measurement of the amount of radiation reaching the surface through the atmosphere. The spatial and temporal patterns in optical depth tell us about the aerosol and cloud cycles in the atmosphere. The water cycle is not well-characterized, so understanding the nature of water vapor and ice in the atmosphere is important. Using images from the Mars Exploration Rover Spirit, the nocturnal optical depth was calculated for several bright stars in well-known constellations. The optical depth pattern observed was a 0.2 - 0.8 increase at night and the highest increases were observed around or after local midnight. These observations are consistent with the hypothesis of nocturnal cloud formation. Boundary layer dust and fog are also considered as potential processes for the lower elevation increase.