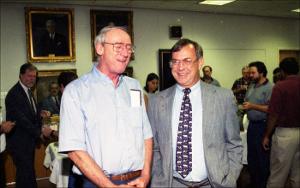 James E. Womack was born in 1941 in the United States. He graduated with a BS in Mathematics Ed from Abilene Christian University in 1964. After completing his BS, he went to Oregon State University and completed his PhD in Genetics in 1968. After completing his PhD, he became an assistant professor of Biology at Abilene Christian University. He was an assistant professor of Biology from 1968 to 1971 and an associate professor of Biology from 1971 to 1973 at Abilene Christian University. Since 1973, he has been a professor at Texas A&M University. He was a professor at College of Veterinary Medicine since 1973 and known for conducting pioneering research in the cattle genome. In 2001 he received the Wolf Prize in Agriculture. He was responsible for the development of a whole genome cattle-hamster radiation hybrid (RH) panel. This work fueled a new thrust in cattle genomics and comparative gene mapping. RH mapping is an effective tool for building ordered maps of conserved sequences, derived from genes, thus integrating linkage and physical maps of mammalian chromosomes. He has taken special interest in assisting the careers of young scientists, particularly those in developing countries. Many of his students have gone on to positions of international leadership in animal genomics.