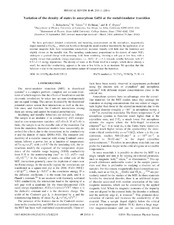 We have performed detailed conductivity and tunneling measurements on the amorphous, magnetically doped material alpha-GdxSi1-x, which can be driven through the metal-insulator transition by the application of an external magnetic field. Low temperature conductivity increases linearly with field near the transition and slightly slower on the metallic side. The tunneling conductance, proportional to the density of states N(E), undergoes a gradual change with increasing field, from insulating, showing a soft gap at low bias, with a slightly slower than parabolic energy dependence, i.e., N(E)similar toE(c), cless than or similar to2, towards metallic behavior, with E-d, 0.5<d<1 energy dependence. The density of states at the Fermi level in a sample, which shows already a small, but metal-like conductivity, appears to be zero at low fields, as in an insulator. We speculate that this behavior is due to the microscopic percolation nature of transport near the transition.