Medium Effects on the Rho-Meson 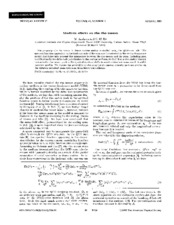 The property of a rho meson in dense nuclear matter is studied using the QCD sum rule. The spectral function appearing on the hadronic side of the sum rule is evaluated in the vector dominance model that takes into account the interaction between the rho meson and the pion. Including pion modification by the delta-hole polarization in the nuclear medium, we find that as the nuclear density increases the rho meson peak in the spectral function shifts to smaller invariant masses and its width becomes smaller. We discuss the possibility of studying the rho meson property in dense matter via the dilepton invariant mass spectrum from heavy-ion collisions.