The Mina De Malfois Archive
JavaScript is disabled for your browser. Some features of this site may not work without it. 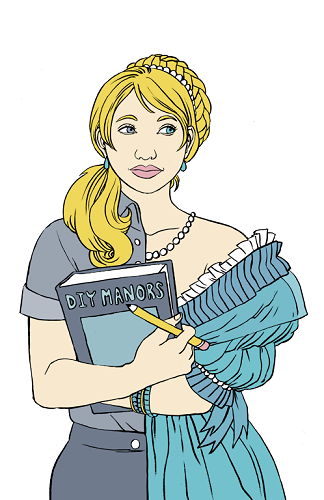 Mina De Malfois is a fanfiction writer, diarist and commentator, and a so-called “Big Name Fan” (BNF) in the multilayered society of Sanguinity fandom. Her anecdotes, stories and recollections document the personality quirks and clashes as well as ongoing debates sparked by Mina’s fellow fans’ passionate feelings about their beloved Sanguinity universe.

Sanguinity, as everyone knows, is a complex fictional world combining elements of romance, fantasy and horror. In one of her journal entries, Mina herself defines it as a “multilayered narrative text containing and yet questioning all the tropes of vampire, and incidentally angel, literature, in a smooth coy retelling which demonstrates conclusively the death of the author by allowing the reader, or “player” to re-enact the demise repeatedly.” It’s a universe that has inspired a lot of fanfiction and many powerful and opinionated fans, Mina among them. Texas A&M University is pleased to be the archival repository for Mina’s digital and digitized journals, podcasts and stories.

Of course, the twist here is that neither Mina De Malfois nor Sanguinity itself…actually exists.

“Mina De Malfois” is the pseudonym for an unidentified fan (who goes by the alias of “Carlanime”) who uses the character of Mina in a series of imaginary diary entries and stories as a satirical yet affectionate exploration of issues, debates and personalities inside real-life media fandom. Mina also satirizes media fandom during the height of the blogosphere (as expressed on sites such as Livejournal and JournalFen) and during an increasingly visible online presence for a number of fandoms (such as Harry Potter and Lord of the Rings, neither of which play an explicit role in Minafic per se, but are nevertheless influences as witnessed in Mina's extensive footnotes). Carlanime has been joined by other fan authors (most of whom also write in the voice of Mina) in an interestingly meta shared universe. Meta because Mina exists at the center of an increasing spiral of identity shifting: The actual human being behind Mina masks herself beneath the alias “Carlanime”, and in this fictional identity takes on the also fictional persona of Mina De Malfois. Mina herself uses the name “Mina De Malfois” as her own alias, and her ‘real’ identity is never truly revealed, only hinted at.

The Minaverse is a place for multiple writers to explore fictionally what issues rock, roil and otherwise concern the world of fandom, and taken as a whole the corpus of materials in the Minaverse is an unusual and fascinating method by which interested researchers can understand how fans function as social communities as well as how some of them see themselves and their fellows.

The Mina De Malfois Archive contains stories from “Mina” herself (Carlanime), plus numerous others from fans that Carlanime generously allowed to play in her world. Also included are several podcasts, examples of Mina-oriented fan art, and pieces of Sanguinity fanfiction. The latter again demonstrates the meta nature of the Minaverse – fanfiction about a nonexistent fandom that serves as a satire of existing online fandoms.

More information on Mina is available at http://fanlore.org/wiki/Mina_de_Malfois.

All rights are reserved to the fanwork creator(s) and publishers. Materials in the Mina De Malfois Archive have been included based on creator permission.

The image of Mina presented above was created by and is credited to Mute Cornett.